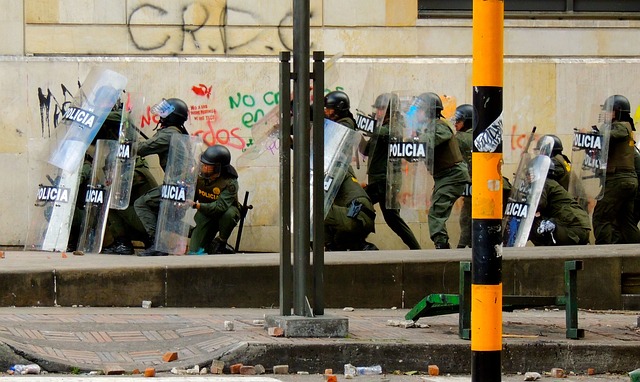 Colombia is going through another period of unrest.  The most recent wave has been sparked by events ranging from lack of sustainable government response to COVID-19 to dealing with the exodus from Venezuela, with some protests descending into violence. The Colombian security forces have responded with swift and uncompromising countermeasures. Current estimates are that 40 people have been killed and 27,000 people displaced in the unrest. The use of truncheons, rubber bullets and tear gas are widespread and have been condemned by NGOs. Amnesty International has called the government’s response “excessive” and “disproportionate”. Tensions are still rising and the Pope recently renewed his appeal for calm and to open “serious dialogue” between the protesters and the security forces; currently, this seems to have done very little to thwart the unrest.

An insurgency has swept across various African states, with Islamic fundamentalist groups attempting to exploit the weaknesses and gaps in society and the political system. The European Union and United Nations are offering assistance to try and maintain some level of control. In late April, President Déby was killed in the crossfire between the Chadian military and rebel forces. Renowned for ruling Chad with an iron fist, Déby maintained cordial relations with the West, especially with their former colonial rulers, France, who are consistently one of Chad’s largest donors.

Since the death of President Déby, his son Mahamat has taken over as the de facto president. His son is currently the third youngest head of state at 37years old. However, the military he has inherited is bitterly divided by internal stresses, e.g. corruption and high levels of inequality, which could lead to further internal unrest leaving the administration fighting on two fronts and therefore risking sympathy towards fundamentalism and extreme politics to thrive. The developing situation in Chad is likely to have a knock-on effect across neighbouring countries.

Tensions in the Gulf continue to rise. It’s only a few months since Iranian Security Forces hijacked an oil tanker causing international concern as governments contemplated appropriate reactions. Iran has once again been testing the international community by harassing US navy frigates, leading to warning shots being fired across the bows of some vessels.

The Iranians are still in the process of negotiating a new nuclear deal, after the US withdrawal under the Trump administration when Iran restarted their nuclear enrichment process. Currently, Iran has enriched uranium to 63%, close to the 70-80% enrichment needed to develop a rudimentary nuclear weapon.  The US is helping to mediate a new deal, similar to that of the Iran Nuclear Deal of 2015, however, these recent actions have slowed progress and could even halt the talks. At the time of publication, the International Atomic Energy Agency (IAEA) chief has sounded the alarm about Iran’s enrichment process’s as suspicious and described it at levels that “only countries making bombs are reaching”. Iran is defending the actions, explaining it is only for medical and research purposes. It is yet to be seen how this will impact the ongoing talks to denuclearise Iran, as the fifth round of talks is about to start in Vienna.

Israel and Palestine have a well-documented and difficult relationship, which often oversteps diplomacy into violent unrest. However, it seems the recent violence has the danger of becoming a serious conflict, with rocket and bomb attacks killing 230 people in Palestine and 12 in Israel. Currently, the opposing sides have agreed to a ceasefire after 11 days of fighting.

The UN has called upon the International Community to put together a reconstruction programme to help the Palestinian state. Both sides are still trading strong words and few believe that the ongoing talks will solve the fundamental differences between the two states in the short term, which could provoke further unrest and highlight the fragile nature of this truce.  However, the US and UN are urging both Israel and Palestine back to the negotiating table, as they both believe there is “a genuine opportunity to make progress.” The UN favours the idea of discussing a two-state option with both Israel and Palestine authorities, drawing territorial lines similar to those drawn pre-1967 before the 6-day war.

China in the Atlantic

China has continued to expand its influence outside of Asia and the South China Sea, particularly in Africa, which alongside the West and Russia, is fast becoming akin to the “Scramble for Africa” of the late 1880s, as numerous countries are again competing for influence on the continent.

China already has a military presence on the continent, with a permanent military post in Djibouti. This naval stronghold provides direct access to the Gulf of Aden and perhaps, more importantly, the Suez Canal. While China maintains that the base and its mission are purely a headquarters for humanitarian and anti-piracy operations, their proximity to some of the world’s most vital shipping channels is causing concern.  The world has recently experienced what can happen if Suez Canal traffic is disrupted.

Equally concerning is that China has approached several African nations requesting to set up a naval base on the Atlantic coast. At present, no country has accepted but Gen. Stephen Townsend, US General Africa Command, said, “the result could be Chinese surface ships and submarines thousands of miles from their traditional operating areas, which could prove to be problematic for U.S. forces in wartime.” It has yet to be determined whether any of the proposed ideas will be accepted by the African nations, but whatever the case, the US and to a larger extent, NATO will be keeping a close eye on how this situation develops.